Do you have any photos of 504's or the M/cr to Bury line that you would like to share with us, to publish on our website or in our magazine?

We also need the permission of the photographer to publish them.

Please send them to: editor@class504preservationsociety.co.uk

Electrification of the line took place in 1916, with the original five carriage E.M.U. sets which were built in Newton Heath, Manchester.  The Lancashire and Yorkshire Railway introduced the sets, they were built at a time when electrification was considered a bad move, “I am not interested in making money, but saving money” said John Aspinall of the Lancashire & Yorkshire Railway in 1916.

The L&Y five car sets ran until 1959, then with the introduction of the 504s, both types of unit ran together for a short time until the withdrawal of the five car sets.  The class 504s were built at Wolverton and were some of the last stock built before the Beaching reorganisation in 1959. They were built to a standard British Railways design with English Electric traction equipment. They were originally painted in Green livery, then over the years the class carried a number of different liveries, all over BR Blue, BR Corporate Blue and Grey, before finally being painted in what became known as Jaffa Cake livery, orange and brown which was the same livery as the then called GM Buses were painted. 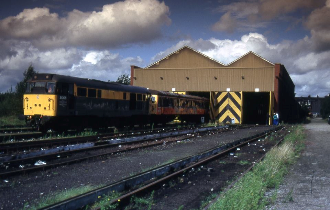 On the night of August 16th 1991 the class 504's worked their last passenger services under British Railways. They were then withdrawn and soon afterwards most of the class 504's were moved to Glasgow to be cut up for scrap. Over the following 6 months the Bury to Manchester line was converted to the new Metro-link tram system.

On 17th August 1991 two class 504 sets were moved to the East Lancashire Railway by Sentinel shunter “Jean” and a class 31. Class 504-461 was eventually cut up on the E.L.R. but Class 504-451 remains there and although in a deteriorating condition is now about to be restored by the Class 504 Preservation Society.